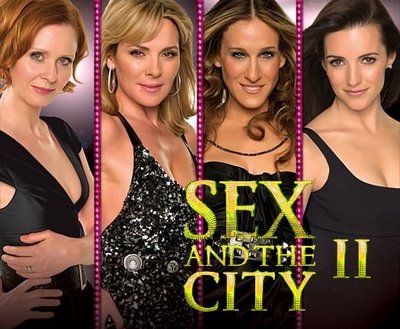 And so the critics were wrong. I was not really anticipating the showing of this movie except for the part that I would be hanging out with my best girls. The reviews were all saying how bad the movie was and what a waste of money it would be for moviegoers who were just waiting for the SATC2 release.

It was true that the sequel was not as serious as the first one but it did not mean, it was not equally good. We were laughing all through out the movie and maybe it was because we, the girls and I, were just appreciative of every littlest thing there was, but the fact that I could hear the audience laughing with us was just proof that we were all carried away by the movie.

One more good thing about it was the fact that the girls were still consistent with their characters. Carrie was still the fashionista writer, Charlotte was still the conservative mommy and Samantha, the feisty, naughty and young looking sex-addict. Sorry for the lack of a better term. The only one who kind of differed was Miranda. Yes, she was still strong and independent but this movie also showed her fun and mommy-fied side.

After the movie, we had coffee to catch up with our lives and I was just so thankful for these girls who remained my best friends for 14 long years. We may have had big changes in our lives but our roots were still the same. They were the same roots we had when we first met in an old classroom in UP Diliman in 1996. As I mentioned to one of them last night, we did not need more friends in our lives, what was important in life would be having quality friends – ones who’d be there until you would be needing canes to walk. I was blessed to have that kind.

So anyway, enough of my sentimental blah and for those who haven’t watched the movie yet, it is time for you to get Carrie-d away. 🙂