I love this film which stars Keira Knightley, Mark Ruffalo and Adam Levine. Who would have thought Keira could sing? She has such a soft and lovely voice that can lull you to sleep.

The movie, as the title suggests, is about beginnings. Keira’s character Greta, a singer-songwriter, is looking for a new beginning after being cheated on by her long time boyfriend, Dave (played by Adam), a rockstar basking on his newly realized stardom. Mark’s character, Dan, is a ruffled yet brilliant drunkard who convinces Greta to sign with him to start a record.

Set with New York city as a backdrop, the film shows the duo playing and recording their song amidst police sirens, car horns and yelling locals. I love the songs, by the way, especially the track called “Lost Stars.”

Reading about the creator of this movie, John Carney. He is known for simmering any sexual tension between the characters on screen. I really didn’t know who will end up with who even on the last 5 minutes of the movie. But I really find the platonic lust amusing. There are scenes in the movie where no words are uttered yet the facial expressions and the music says it all. Sometimes, music can make you feel all sorts of emotions that you cannot fathom and that seems to be what happens between Greta and Dan.

I will not spoil the ending but I will say that I like how the films ends. Sometimes there are things that are better left unsaid or undone. There is also a love that you have to let go even though the feelings are still there for each other. These things make you a bit sad but stronger and maybe a little bit wiser too… 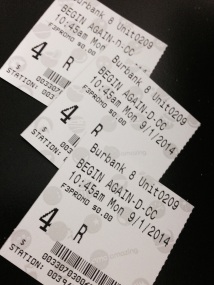 PS – The song “lost stars” reminds me of being a freshman studying literature and all the ideals I had back then. It gives me a feeling of vitality like walking around the university and being oblivious to all things that can jade me when I grow up.

“Are we just lost stars trying to light up the dark?…”